A near miss with tragedy

In the month leading up to the 20-year anniversary of Sept. 11, 2001, we're running a series of related articles. We'll speak with the families of alumni killed in the attacks. We'll share alumni, faculty and staff memories of a campus coming together amid tragedy.

More in this series:

Photos at Creighton on the day of 9/11

Ernie Goss still has the note.

Faded now but still legible, its few words are a permanent reminder of the graciousness of human nature but also of its susceptibility to evil.

The few words are scribbled on the back of a restaurant ticket. They are from a kindly waitress, who wished Goss and his wife, Jackie, a great visit during their time in New York City and thanked them for visiting the Windows on the World restaurant on the 107th floor of the North Tower of New York City’s World Trade Center in lower Manhattan.

It was Friday, Sept. 7, 2001, and the gentility of that note within just a few days would be countered by a historic act of evil that brought the restaurant, along with the entire World Trade Center, crashing to the ground, taking 2,977 lives. Goss was staying in a Marriott hotel sandwiched between the north and south towers, and but for a coffee-induced sleeplessness would likely have died among the rubble that fateful morning.

A research paper Goss wrote for the National Association of Business Economics had been named “Paper of the Year,” and he was invited to receive an award at the association’s 43rd annual meeting held from Sept. 8 to Sept. 11, 2001.

The award ceremony was held Sept. 10, the evening before the conference’s concluding events the next day.

“My wife and I got there on the Friday before the Tuesday that would become 9/11,” Goss recalls. “We had a beautiful evening.

“We went to Windows on the World, which was the most beautiful restaurant I had ever been in simply because of the view. We were situated so that we were looking up Manhattan from Wall Street. The waitress, who I remember was from the Bahamas, was very nice and she wrote on the back of the ticket, ‘I hope you have a great visit in New York and thank you for being with us.’

“She might well have been one of those who died. Those people working in Windows on the World did not live.”

Jackie Goss, due to family responsibilities, returned to Omaha on Sept. 10 while her husband stayed to receive his award before leaving the hotel for a mid-morning flight to Des Moines, where he had a Sept. 11 speaking engagement with a travel industry association. That evening, Goss says — the evening of Sept. 10 — he drank coffee, which he almost never does. A restless night ensued, followed by an early morning decision to pack up and leave early.

Had Jackie stayed for the award ceremony, he says, it is almost certain they would have been in their hotel room when the steel and concrete rained down.

“I have thought about this a lot,” Goss says. “My wife works out, and on top of the Marriott there, at the World Trade Center, you can run on a treadmill while watching planes fly into LaGuardia. If she had been working out, which is what she would have been doing if she had stayed, she would have seen the plane when it hit. Now, that’s just hard to imagine.”

Those who remember that dark day will recall the confusion that reigned as aircraft all across the nation were grounded in response to fears that other attacks might join the assaults on the World Trade Center, the Pentagon and, apparently, on the Capitol building before passengers crashed a third hijacked plane into a field in Pennsylvania.

Having left his hotel before the checkout clerks were at their stations, no record existed of Goss’ departure, and the conference organizers, assuming the worst, called Jackie to tell her of the terrible possibility that her husband might have died in the rubble. Having already heard from her husband, however, she was able to put them at ease.

The surrealness of the day remains with Goss.

“We got grounded in Saint Louis, and I didn’t know why,” he says. “I heard the attendants saying, ‘And they did what?’ Everybody had to get off the plane. I just sat back there and heard them saying, ‘They attacked what?’ I thought it was some kind of nuclear attack; I just didn't know.” 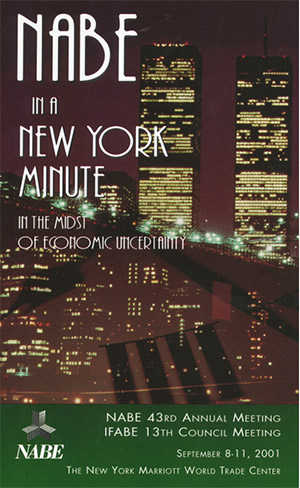 The truth emerged in the bar at the St. Louis airport, where the television news was full of reports of the terrorist attacks. And then the grounded planes began swooping in.

“It was eerie to watch all the planes being grounded,” Goss recalls. “It wasn't like normal, where one lands and gets off the taxiway and then another one lands. No, no, one plane did not get off the runway till the other one landed. It was boom, boom, boom, landing.

“That was obviously crazy. But then we learned that everything was being shut down, the whole nation was shutting down.”

Back at the World Trade Center, where many of the approximately 300 conference attendees were listening to a concluding address, the first plane hit the north tower.

“It was horrible,” he says. “Worse than horrible, people were jumping from the towers.” 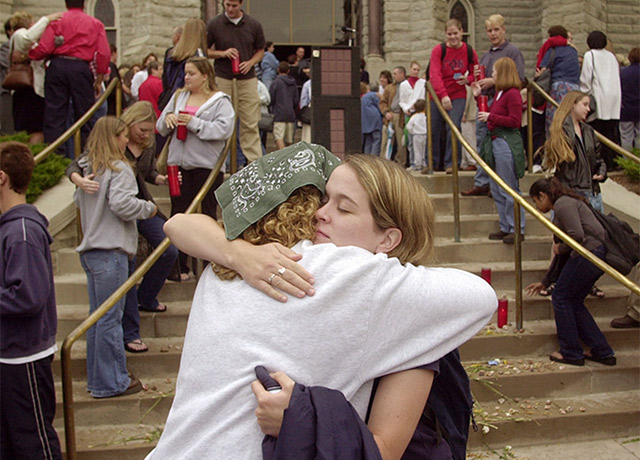 A collection of images from the Creighton University Archives. 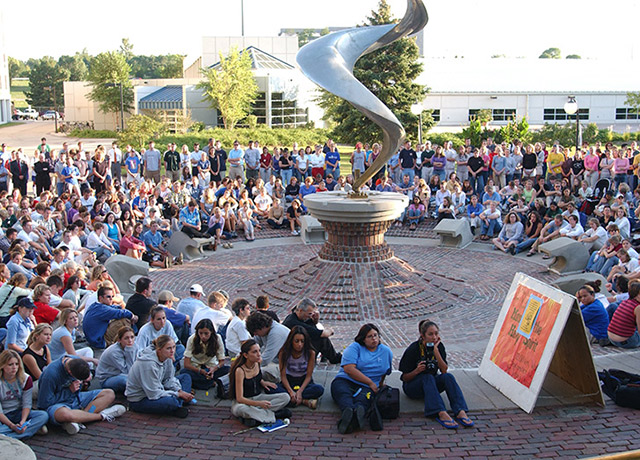 We spoke with alumni and staff who were at Creighton on Sept. 11, 2001. They recalled a campus coming together in the face of crisis — with faith, hope and prayer.