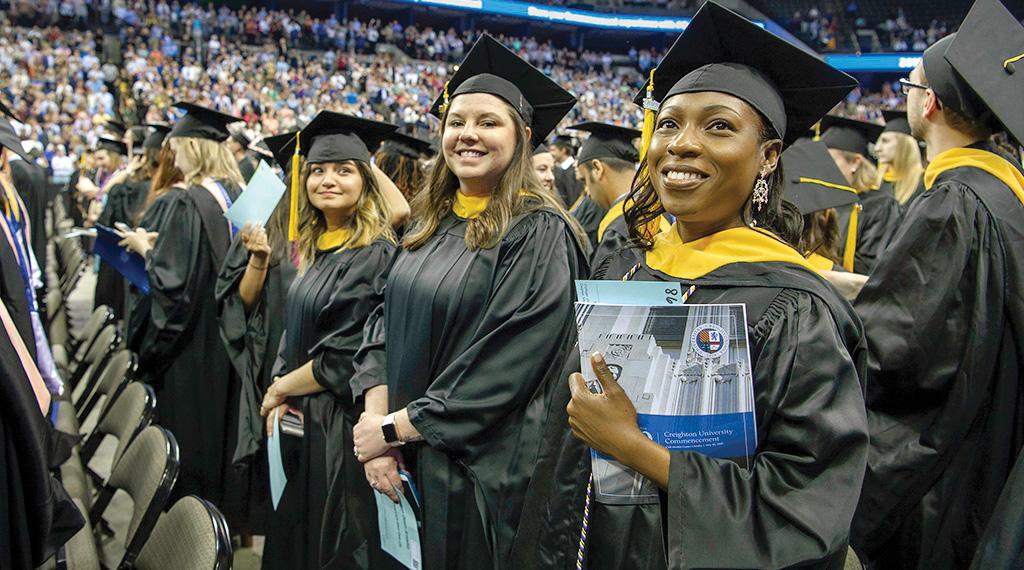 Humanistic education is the heart of the Jesuit tradition. We’re talking about forming good human beings. You see the value of a Jesuit education in who our students become.

In tough times, Creighton carries on — continuing a tradition of education nearly five centuries in the making.

We talk a lot about what a Jesuit education means. Any Bluejay has heard a great deal about magis, about cura personalis, about being women and men for and with others.

The idea is and will always be this: Creighton is a special place, distinct from any other. Its Jesuit mission and values shaped its first 142 years. They will continue to guide its future.

The past year left no facet of society unchanged. And that most certainly includes the landscape of higher education. Paradigms and priorities are shifting daily. Universities are adapting in response.

It’s a time for action, of course. But also for reflection, for re-examining long-held traditions and values. It’s a time to ask ourselves, Why Creighton? Why now?

In a series of interviews, we asked the Rev. Daniel S. Hendrickson, SJ, PhD, and a group of administrators, students, faculty, staff and alumni to explore the value of Creighton in the face of a rapidly changing world.

We asked them to explain, in their own words, what a Jesuit education means to them and why it matters.

There was a time when Fr. Hendrickson himself had no idea what a Jesuit was, even as he started his freshman year at Marquette.

Fr. Hendrickson: I came up through a Catholic school run by the Benedictines. My uncle had been a Jesuit years earlier, but I actually had no idea what a Jesuit or a Jesuit education was all about.

A few decades later, he’s learned a thing or two about the Jesuits. For example …

Fr. Hendrickson: A Jesuit education is a globally networked, longstanding, well-proven program unlike anything else in the history of education.

John O’Keefe, PhD, theology professor: A Jesuit education is an intellectual tradition that unifies faith and reason in a meaningful way.

Patrick Fenner, BA’20, Jesuit in training: A Jesuit education is one that asks — “How can I take what I’m learning and create a positive impact in the world?”

A Jesuit education is rooted in a foundation of the liberal arts.

Fr. Hendrickson: A lot of places are discontinuing humanities programs because fewer students elect to take them. Creighton requires them.But the human doesn’t stop at the humanities.

The Rev. Andy Alexander, SJ, director of the Collaborative Ministry Office and Online Ministries: Humanistic education is the heart of the Jesuit tradition. We’re talking about forming good human beings. You see the value of a Jesuit education in who our students become.

Fr. Hendrickson: Because we believe we give our students an ethical framework for the rest of their lives.

The Rev. Nicholas Santos, SJ, business professor: It’s not just about knowledge. It’s about the different dimensions of what it means to be a person.

O’Keefe: It’s not just about career prep. It’s about training minds to navigate the complexities of the world.

Kevin Graham, PhD, philosophy professor: Of course, this education is about helping our students achieve a nice life for themselves. But it’s much more than that.

Fr. Alexander was visiting a relative in an Omaha nursing home when a woman who worked there stopped him. “Are you from Creighton?” He was. “I wanted to tell you how much I love Creighton nurses. You can spot a Creighton nurse right away. They’re smart, but they’re also compassionate and caring by nature. They can think on their feet and work together through anything.”

Fr. Alexander: People who come to Creighton know, or soon find out, that this place isn’t about cranking out more doctors and lawyers and pharmacists and nurses who can live in bigger houses than their parents. This is about creating citizens who will make a difference. This world is a mess. We have a mission to form people who will make it better, especially now.

A Jesuit education, he says, prepares one for that world and the difficult times ahead.

Fr. Alexander: We’re prepared for this because we’re called to be people who reflect on transcendent values the way our mission statement says, and we’re invited to see the bigger picture, to help others cope with it and to move from fear to compassion and generosity.

Graham: In some ways, the values of the Jesuit, Catholic education mission can seem like a nice, warm, fuzzy added extra a lot of the time. But at a moment like this, it’s important to see that they give us a kind of orientation towards why this education is so absolutely, fundamentally crucial.

Kyle Lierk, BSBA’99, director of Campus Ministry: One thing the Jesuits have always done well is make sure that ministry and education are relevant to the times. They know how to adapt and recalibrate while maintaining the core of what they’re about.

Fr. Santos: It hasn’t been smooth sailing the whole way, for the Jesuits or for Creighton. What has kept Creighton going, even through difficult times, is not giving up, not losing hope.

Fr. Hendrickson: And that’s so true. We have to know who we are before we go into the world. Our move to the BIG EAST showed that we were ready for national recognition in our sports programs, and that exposure has been great for Creighton. It’s the right time to expand in Phoenix and to share that mission in a different place and extend what we’re doing so well in Omaha.

One big question Creighton faces is this: How can a tight-knit Midwestern university on the small side go out into the world, how can it expand and adapt and innovate without losing sight of its core mission, values and history? The answer: By doubling-down on its identity. By digging in. Deep roots, long branches.

Burke-Sullivan: If the tree is going to grow into its environment and give life, what happens under the soil matters.

This particular tree is especially well-positioned for growth, Fr. Hendrickson says, because branching out into other parts of the world is baked into the Jesuits’ DNA.

Fr. Hendrickson: Ignatius of Loyola started the Jesuits when Europe was changing from a medieval mindset to a decidedly modern one. By the time the Society of Jesus was codified, the Jesuits were already going global — from Rome to Lisbon to India to Japan to China.

Burke-Sullivan: Ignatius was clear from the beginning that Christianity has to touch the world.

Fr. Hendrickson: A Jesuit institution has an extra sense of obligation for global commitment, to engage the world in thoughtful and respectful ways, to understand other cultures, to think more broadly and feel more expansively.

Fenner: Creighton is a community that focuses heavily on a different kind of success. You leave Creighton a different person and a better person than when you came in. To me, that’s the defining characteristic of a Creighton education and a Jesuit education in general.

When Kyle Lierk first arrived as a Creighton student, his sole goal in life was to make a lot of money someday. But Creighton changed him. He started spending all his free time going on service and justice trips and retreats. After graduation, he joined the Jesuit Volunteer Corps. The group’s motto — “ruined for life.”

Lierk: I didn’t know what that meant until those two years were over. But I was ruined. But ruined in the best way possible. That experience and my Jesuit education ruined my plans but revealed God’s plans. It revealed where I knew in my heart I wanted to be.

Fr. Alexander: If you’re looking for the “value” of a Jesuit education, it’s directly related to how valuable our students become to the world when they leave here.

Beth Samson, BA’13, MA’16, pastoral coordinator for faith formation: I think most students will say that they’ve been changed in some way, that Creighton transformed them.

Samson first came to Creighton because she was offered scholarships.

Samson: But what unfolded during my four years as an undergrad were so much more than I could have imagined when I first set foot on campus. Even my parents were transformed by my education. They saw how it changed me, and it impacted and deepened our relationship.

Creighton, Samson says, helps you define who you are by giving you the space to ask the hard questions.

Burke-Sullivan: Questions like — “Why are we here?” “What does it mean to be here?” “What happens after we die?” Those core questions about being human are what drive us.

Lierk: I think that’s the gift we give our students. For them to be able to identify who they are at their core, to identify what brings them passion and joy and fire. And then to ask the question — “Where does the world need that passion, joy and fire?”

Fr. Hendrickson: Clearly, from time to time we probably graduate some scoundrels. (Laughs). But in the best-case scenario, we have people who recognize what’s important in life.

Samson: It all starts with the connections you form here.

Lierk: When I was an undergrad, the University president was Fr. Morrison. And every day over the lunch hour, I would find the president sitting on one of the benches outside St. John’s. He was always there to help me with a big question or a crisis.

In its purest form, a Jesuit education perhaps boils down to this: Knowing exactly where to find a Jesuit at 12:30 on a Tuesday afternoon. 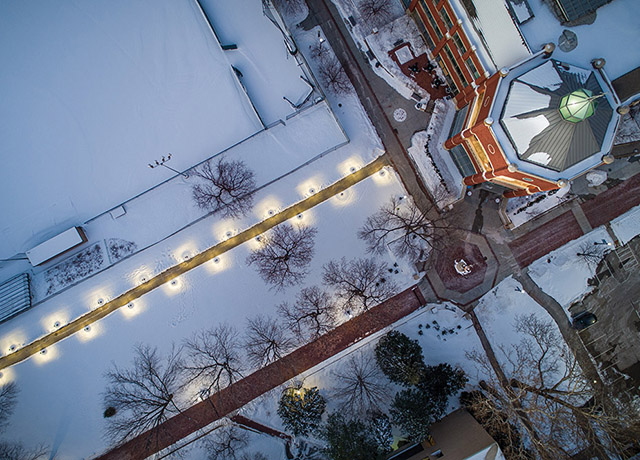 Take an aerial tour of campus with this collection of recent photos. 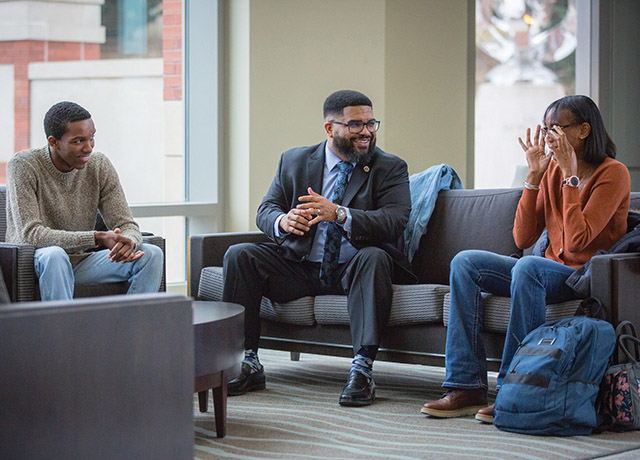 Comprised of more than a dozen members, the board is both a culmination of a lot of work and another step in a larger mission of diversity and inclusion for the entire Creighton community. 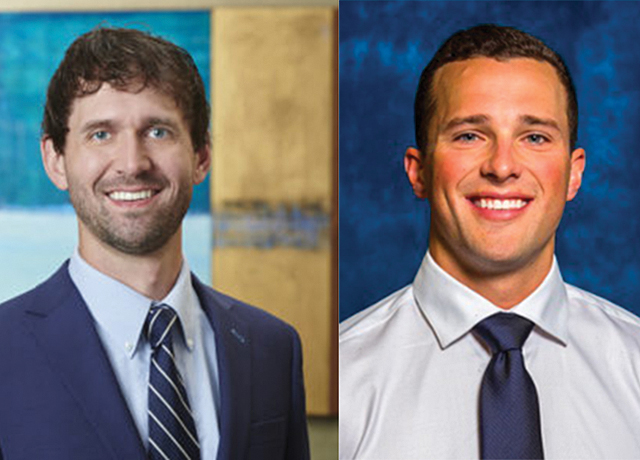 Alumnus inspires and motivates student through the rigors of dental school

When D4 student George Noesen graduates in the spring, a decade will exist between his and Luke McMahon’s, DDS’11, Doctor of Dental Surgery degrees.