How Edward Creighton united a nation

And brought America online.
And became the hero of a Hollywood Western.
And a comic book. 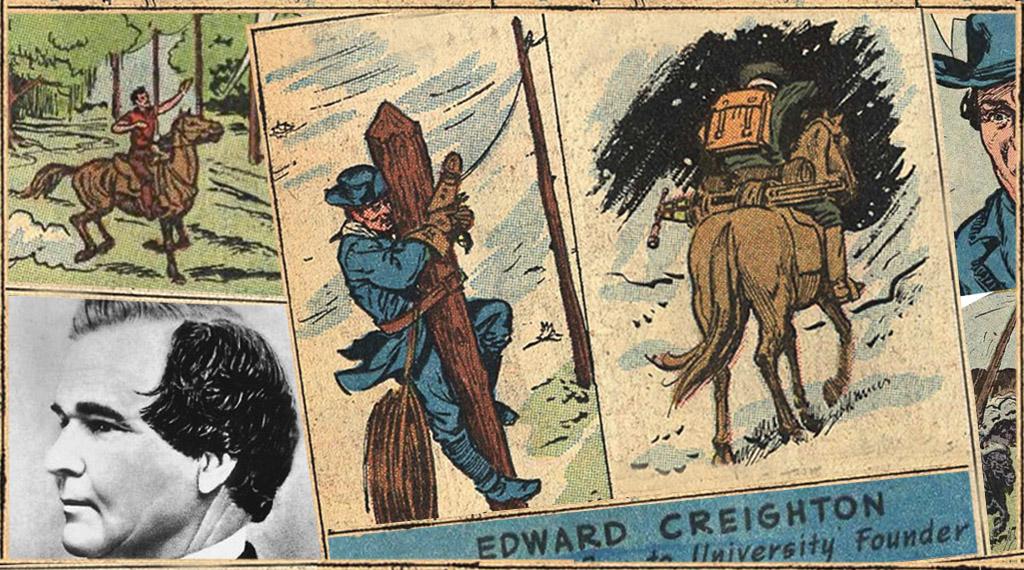 Creighton's founders not only dared to dream; they worked tirelessly to realize those dreams.

With a nation deeply divided, Edward Creighton set forth to bring America online.

In the process, he (along with his brother John and many others):

One-hundred and sixty years ago — a few months after the start of the Civil War — Creighton led the construction of the transcontinental telegraph system, connecting the eastern U.S. to a network in California. Via his home of Omaha.

And also his own comic book caper, written by Eileen Lieben, Creighton University’s longtime dean of women. (We’ll use a few of the comic book’s stills to tell Edward Creighton’s tale.)

We're revisiting the time Ed and John first made a name for themselves. This is the origin story of the Creightons — a family who dreamed big, gained much and gave back. To a nation on the mend and a city on the rise.

In the fall of 1861, the country at war, President Abraham Lincoln received one of the most important emails in American history.

It came from Stephen J. Field, the Chief Justice of California, sending the first cross-country telegraph message: “[The people of California] desire in this the first message across the continent to express their loyalty to that Union & their determination to stand by the Government in this its day of trial.”

California's pledge of allegiance assured Lincoln, who’d been inaugurated earlier that year with the promise to halt the admission of new slave states in the West. Winning the war meant stopping the spread of the Confederacy. For our better angels to prevail, a far-reaching line of communication was a must.

At this point, the telegraph was still a relatively new technology. The first message in the U.S. — “What hath God wrought” — had been sent just 16 years prior, from Washington, D.C., to Baltimore.

The war and this new means of communication made Lincoln our first extremely online President. He was a deeply prolific user of the telegraph, writing nearly 1,000 telegrams over the course of his presidency, communicating with Union generals and the general public alike.

Lincoln reportedly visited the telegraph office near the White House every night and sometimes slept in the office during pivotal battles.

Thanks to the Creighton-led completion of a coast-to-coast telegraph, the President had boosted his signal the breadth of a nation, the country held together on a wire.

"From their humble beginnings, Edward and John emerged as people of courage and vision who had a profound effect on nearly every aspect of economic, political and cultural life in the Great Plains. Creighton's founders not only dared to dream; they worked tirelessly to realize those dreams."

As a boy, Edward Creighton would regularly run off to the woods to collect nuts with his friends and siblings. Of the children, he reportedly took the greatest risks, climbed the highest trees and assumed the most difficult tasks. He displayed these traits the rest of his life.

In that life, Creighton would work as a farmer, philanthropist, rancher, road-grader, wagon-freighter and the first president of First National Bank of Omaha.

But he made his name (and his fortune) as a builder of telegraph lines. The story goes that …­

(A note about the comic book: While its depiction of the Creightons’ story is generally accurate, some of the details are apocryphal or incorrect. Some pages feature dated portrayals of Native Americans that we do not endorse and did not include here. The comic book frames we use herein tell the true story — with some embellishments. )

Edward Creighton took part in pretty much every aspect of the telegraph business, from pole delivery to supervising the construction of many major projects.

By 1860, Creighton was married (to Mary Lucretia Wareham), living in Omaha and enjoying a reputation as a trusted builder of telegraph lines. Creighton built the first line out of Omaha, connecting Nebraska to the East via St. Joseph, Missouri.

By this point, there were short lines all over the U.S. But as tensions escalated between North and South, East and West remained unconnected. California had extended its telegraph only as far east as Nevada. Coast-to-coast communication still required the use of the Pony Express, and a faster means was urgently needed.

And Edward Creighton had a plan — a nation-spanning route that passed right through Omaha.

In the winter of 1860, Creighton embarked on a Western Union-financed survey of his proposed path. He took a stagecoach from Omaha to Salt Lake City, but for the next several hundred miles west …

“Creighton pushed on from Salt Lake City alone on horseback. It was a long, wearisome and perilous ride. The snow was deep, the weather was intensely cold, and he suffered from a frostbitten face … However, the adventurous and brave prospector urged his faithful steed on and on, along precipitous mountain paths, through lonely valleys, across dreary plains, following the trail of the Pony Express until at last, after many fatiguing days …”

Creighton reached his destination on the brink of death. But he’d found the route for the transcontinental telegraph. He’d found the path forward. 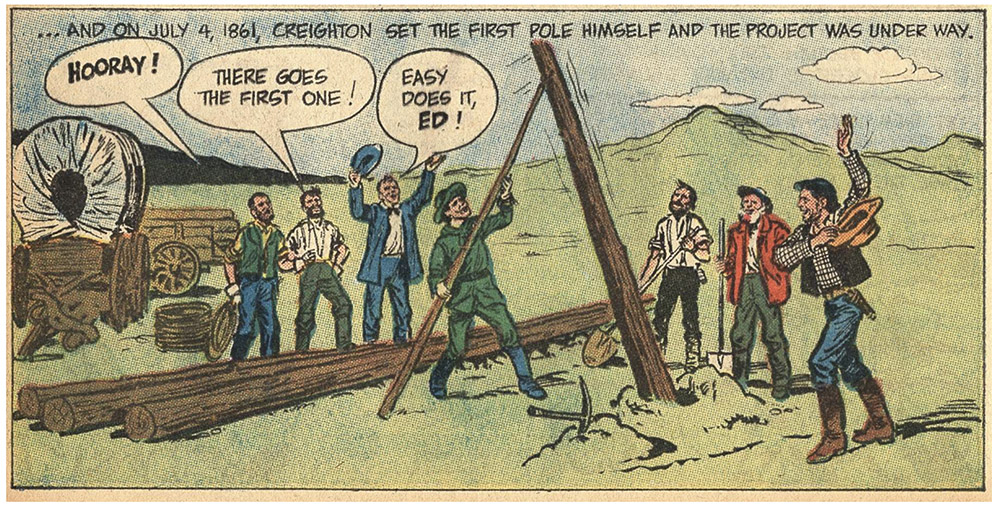 Creighton’s crew included a train of more than 100 wagons, 400 men and 500 oxen and mules. A few family members joined him — including his brother John and cousin James “Long Jim” Creighton (later a member of Omaha’s first city council).

Over the next four months, East and West crews planted more than 27,500 telegraph poles “across plains, desert, mountains and rivers, and strung 2,000 miles of single-strand iron wire.” 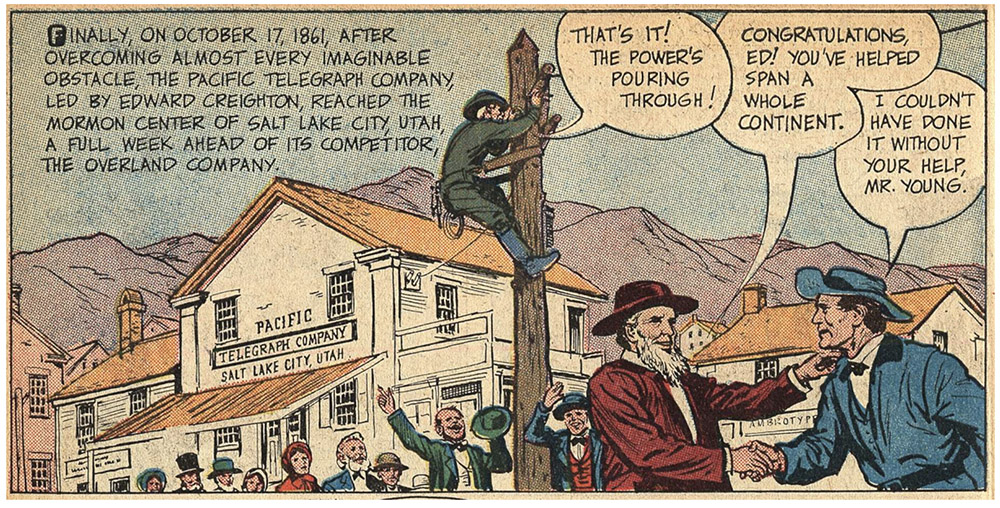 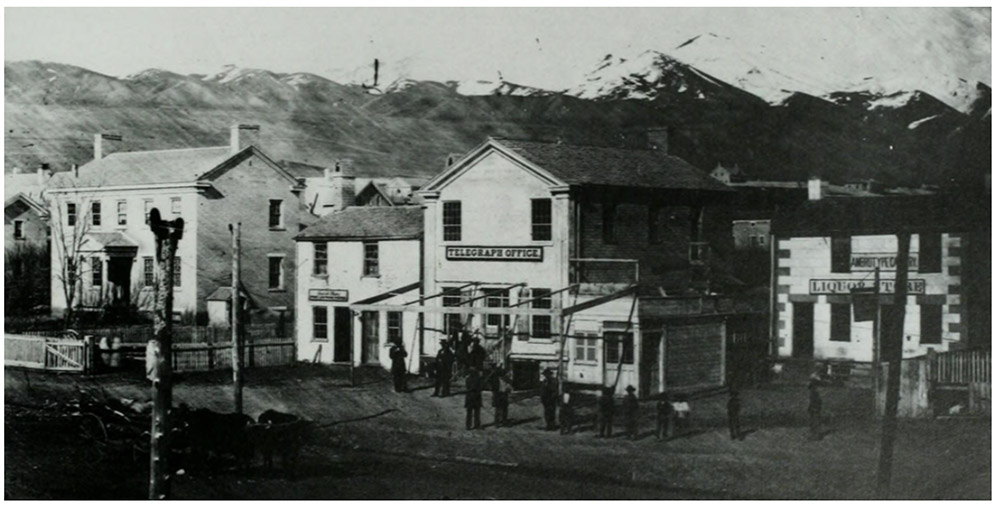 After his end of the line was finished, Creighton sent a telegram to Mary Lucretia in Omaha:

"This being the first message over the new line since its completion to Salt Lake, allow me to greet you. In a few days, the oceans will be united.”

A week later, the California wires reached Salt Lake City, systems connected, oceans united. The New York Times wrote: “It is with almost an electric thrill one reads the words of greeting yesterday flashed instantaneously over the wires from California. The magnificent idea of joining the Atlantic to the Pacific by magnetic wire is today a realized fact.”

The transcontinental telegraph established America’s first industry based on electricity, and it was immediately highly profitable. Telegrams cost $1 per word.

Stock skyrocketed both for Western Union and the Pacific Telegraph Company, and Edward Creighton had holdings in each. “This was,” writes Nebraska History, “the solid foundation of a fortune which grew year by year until Mr. Creighton became a very wealthy man.”

From there, Edward Creighton and his family grew their fortune through ranching, freighting, banking, railroads, real estate, construction projects and more.

But for our purposes, the Creightons are known not for what they gained but what they gave.

As historian Dennis Mihelich wrote, the Creightons were “a family composed of men and women that acquired the American dream, that shared their talents and wealth, and that established a model for those who would serve others.”

Edward and Mary Lucretia were profoundly generous. They gave to charities, civic projects, Catholic institutions and directly to the poor.

Each day, Edward would reportedly give Mary Lucretia $25, and she would ride through the poorest parts of Omaha to dispense it. Her pony, named “Billy,” was known throughout the city. 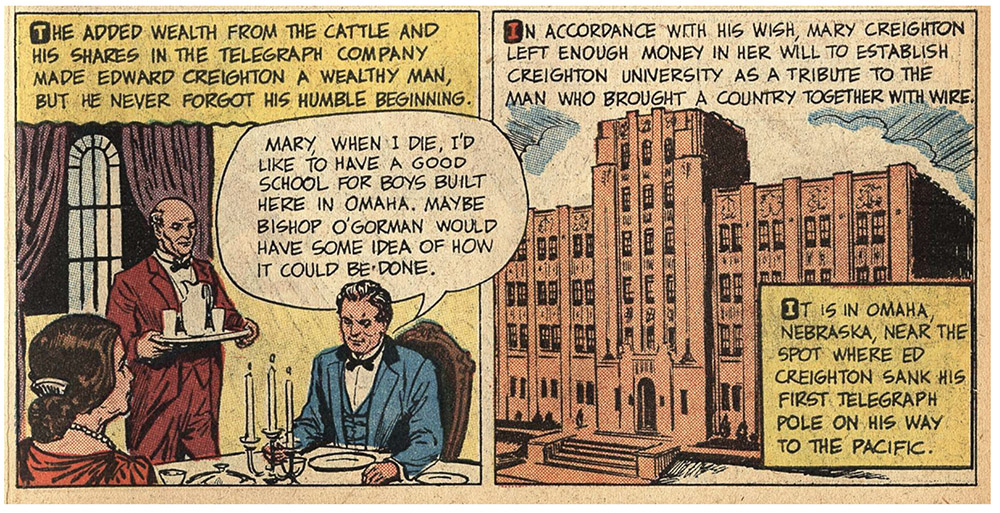 Mary Lucretia left $100,000 to found Creighton University (then Creighton College), fulfilling her husband’s wishes. By the time the college opened, her bequest had doubled.

John and his wife, Sarah Emily, continued their family’s good work at Creighton. He founded a medical college. She financed an improved living quarters for the Jesuits and made one of the lead gifts to build St. John’s Church.

John outlived his brother, his wife and her sister by many years. The rest of his life, he gave away much of his fortune, helping to shape both Omaha and the University that carried his namesake. (He was so well-regarded that a group of settlers in northeast Nebraska named a town after him.)

On his 75th birthday, John Creighton threw a party. Instead of receiving gifts, he announced another gift to the University — $400,000, equivalent to more than $11 million in 2021 dollars.

At the party, he reportedly told his guests: “I have one child, and that is Creighton University.”

In all, John Creighton gave more than $2 million to the University. With his generosity, Creighton grew. With the example he and his family set, the University became a nationally renowned institution.

It’s been more than a century since the last of the founders passed. Yet the family’s spirit of generosity lives on — in our buildings, in our outreach, in the collective impact our donors make every day — every new gift extending a trail blazed in wire.

Before The Beginning - Creighton University

“The Creighton Family: Men and Women for Others” by Dennis Mihelich 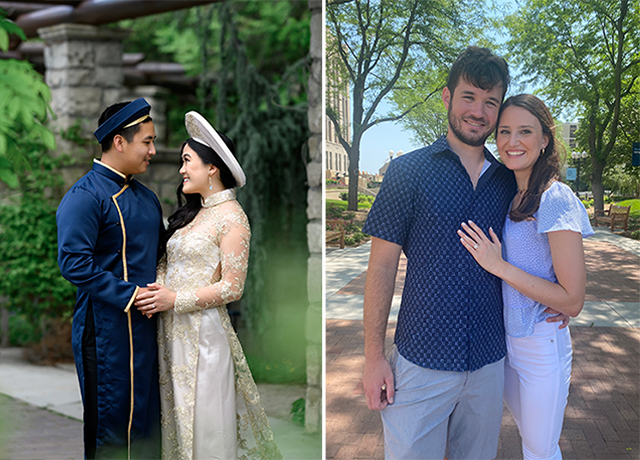 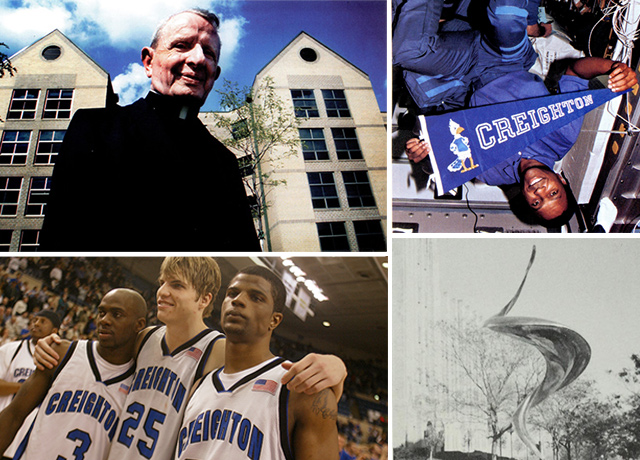 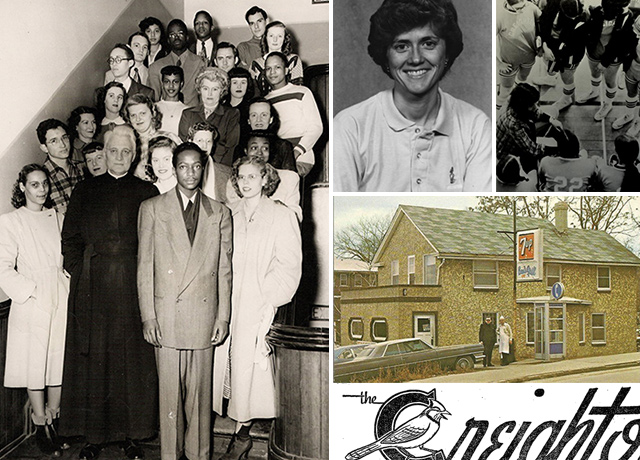